You may remember that I strongly suggest that you comment on blogs. Here's an example of what can happen.

January 24th, I'm going about my business and read, This Guy Lost His Job, Made a Doritos Ad, and Now Might Win $1 Million. The article made me think. So, I commented as such. A few hours later, I have an appointment booked on my calendar with the author saying, "I'd like to interview you for an article: "What's a sales coach and why do I need one?" Three days later, we talked for about an hour. I'll talk sales with anyone, but I found Dan Lyons engaging, interested and interesting. However, I didn't have a clue who he was. He was just some new guy at Hubspot, but cool. It was fun.

Today, the post got published and you can read it here. Best Sales Coach Blog Post ever!

Then, a few hours later, I get an email that says, "You made the Huffington Post!" and I'm thinking, "Huh? Who is this guy?" So, I look up Dan Lyons and I find out that he's not the new guy at Hubspot. He's freakin' famous and Hubspot's lucky to have him and somehow, I got on his radar.

This is probably my best St. Patrick's Day ever! Thank you, Dan!

BTW, are you Irish? 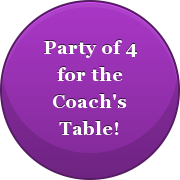