That was an exciting time for me. We didn't talk about the basics of selling. We met once a month and Dave brought challenges that helped us get to a higher level. I never skipped that meeting and as I think back on it, neither did the others. The twelve were totally committed to being the best that they could be.

Fast forward a little. Since 2006, I've met and talked 1:1 with thousands of people. Remember how I worked. So, even though I talked to thousands of people, I wound up working with hundreds and out of those hundreds, maybe a dozen were true sales rock stars. Interestingly, I didn't do a lot differently with the rock stars than I did with the other salespeople that I worked with. Same price. Same material. Same me. Different them. So, I got curious about what the differences were a while back and wrote this article looking for answers. Several of the comments suggested traits that differentiated rock stars.

But that's not the question today. There's a lot of hubbub in the marketing world about ideal buyer personae. The question is not who do you want to fit, but rather who fits ideally. So, I reflected back on the dozen or so super successful sales rock stars that I've worked with to find commonalities. Keep in mind this is me and my rock stars. Nobody else's. Maybe not scientific, but real.

I can think of other similarities that we discovered after we worked together, but these were all knowable before we started working together. An important trait that became evident during our engagements was that they did what they committed to do. I don't mean got the result that we were after. They did the behavior that they promised to do. It was my job to get the result.


If I think of any other similarities, I'll update the list.


Now, if I've tickled your fancy and you're wondering if 2014 could be your year, click the button and if not, forward this article to somebody that it sounds like. 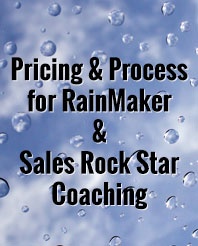