I, probably like you, watched the events of the past year or so that led up to Donald Trump's inauguration last Friday and the world's reaction since. Who was president when you were born? Has any president impacted your development? When did you start paying attention? What do you remember?

The first president to have an impact on me was JFK. Youngest. Catholic. Yeah sure, but the impact happened one day when I said something disrespectful about him. My mother slapped me and said something like, "It doesn't matter what you think. He's the President and you're gonna show him the respect he deserves or I'll wash your mouth out with soap."

I reflected on that as I watched all the politicos on television talk about him, everybody that attended the inauguration and everybody that didn't. I was amazed at the map that showed where all the anti-Trump marches were being held and how many millions were marching.

It reminded me of what Bob Jiguere told me over 30 years ago. Bob was my mentor and in my mind could walk on water. I told him that I hated somebody. He told me, "Rick, nobody's perfect. Not even me." (Read that and two other stories here.)

So, here's a serious question. What do you expect Trump to do? Resign? Be real. That would make the country stronger? That would reunite it?

Back to my questions.

So, what do you remember about the past few Presidents?

"It depends on what your definition of the word is is."

"I did not have sex with that woman."

"two for the price of one"

When Obama got elected, black churches and effigies were burned and much disrespect was shown to our new President. Trump is getting treated the same way. He'll learn, just like Obama did.

Trump can be crass and brash. He's never been a paid politician before. Even some of the people that voted for him are wondering how it's gonna turn out, but the Chief Justice swore him in and he's the president and he, like the 44 before him is not perfect.

Now, we all have to ask ourselves the same question that Carole shared this morning. 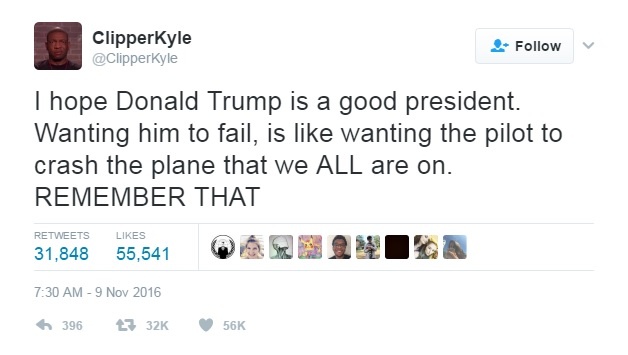