Advice from my Mother

"You can't make this stuff up." 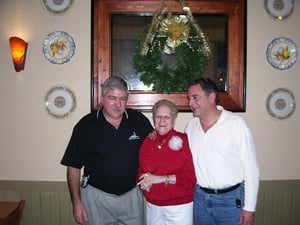 So, my mother is 88 years 9 months old today. She has good days and bad days and she lives on her own. So, she has helpers that come in every day. You should know that Liz is her weekday helper, Maria does Sundays and Amy is their manager.

I called my mother at 12:09 PM on Sunday. Asked how she felt, what she had for breakfast, what Maria was doing. She told me that Maria "called in". I said, "Amy didn't call me." She said, "Maria called Liz and Liz called me." I said, "That's odd. That's not the way that it usually happens." We covered a couple other things and we said good-bye.

At 6:16 that night, I texted Amy. "Amy, no Maria today? Is this working? Relax tonight, but maybe talk tomorrow?"

Amy called me at 6:18. (That's right! 2 minutes! She's awesome!) Amy tells me that my mother left her a voicemail that she didn't need Maria for the day.

I called at 2:07. My mother answered. "Good morning! Sleeping in today?"

"Liz told me that you called."

"How come you didn't tell me that you were having company?"

"I didn't have company. I just wanted a day all by myself with NOBODY."

"I told Liz that we couldn't hide it from you."

Here's the lesson. My mother is not a bad person. She's actually a nice lady, but even good people might lie if the truth won't get them what they want.

Here's the advice. Ask questions until you get the whole truth.