I've used this clip many times to explain the concept of 'happy ears'. I've spoken with a few self-proclaimed sales scientists lately and when I start asking for proof of some claim that they're making they tell me that a study was done and x% blah, blah, blah. The reason that I glaze over and discount their "scientific findings" is that whether it's 1% or .0001%, the salesperson might think, "So, you're telling me there's a chance!" when in fact the prospect is thinking, "Not a freakin' chance. No way. Go away.".

This is scientific formula. PV=nRT. You cannot change the pressure, volume or temperature unless you change at least one of the other two. Not 1% of the time. All the time. It's a rule.

F=ma means if you increase the Force on a mass, it will accelerate proportionally. Push harder, it goes faster. Every time, not usually.

In the formulae above, there are constants and variables.

Are there constants in sales?

What are the variables in sales?

Can you explain sales using the pure sciences?

How much do salespeople need to understand the pure sciences?

I remember one time that my father told me how to start framing a wall at a 90º angle to another. Mark a spot on the existing wall 4' from where you want the new wall to be. Lay a 2x4 perpendicular to existing wall so that it intersects the existing wall where you want the new wall to be. Put the zero end of your tape measure near the 4' mark on the existing wall and angle it toward the 2x4. Swing the 2x4 toward the tape measure until it intersects the tape measure at the 5' mark. Nail it. You've got a 90º angle. My dad quit school in the 9th grade. I asked him how he knew the Pythagorean Theorem. He replied what? He didn't know the science. He just wanted to know how to make a right angle. 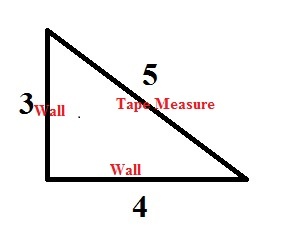 So, what's the right mix of pure science and applied technology?

That's what your sales managers will need to learn.