Are you a closer?

I've been selling for a few years. I've been using the OMG sales evaluation for over a decade. Yesterday, a conversation hit me like a sledge hammer to the forehead. I hope you enjoy the story and the lesson.

Let's set the stage. A good client from a few years ago contacted me because he had hired a salesperson and wanted me to coach the salesperson and simultaneously, have my good client watch me coach his rep to learn how to coach like I do. (I should point out that I'm saying "good" client because he was an Owner Ollie that hired me to make him become a better salesperson a few years ago. He's a really good salesperson, and really good at what he does, but nobody's perfect, not even me, as is evidenced by the following story.)

We had a few conversations in late October, but there was something behind the scenes that he wouldn't share, and the bottom line is that we did not agree to work together.

So, last week he booked a call on my calendar for yesterday. It was pretty clear from the get go, that he was frustrated about the lack of progress with his rep. It was clear that he wanted it to change. It was also clear that he felt like he could do it himself, but that he had a lot of other demands on his time. During the call, he was asking, "Can you help?". "Do you want to help?" but he couldn't say, "I need you to do this."

That's the sledge hammer. I looked at his evaluation after the call. 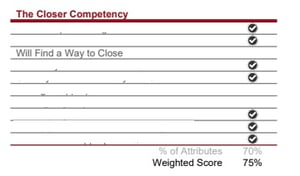 Please don't laugh at the simplicity. I asked, "I think we agree that he needs to be coached. So, the question is 'Should you do it or should I do it?' Do you want to do it or do you want me to do it?"

Lesson. If your rep struggles with his buying process, he will struggle with his selling process and even though something isn't always an issue, sometimes it is.

If you'd like to see how your reps compare with the rest of the world on each of the 21 Sales Core Competencies, check this out.