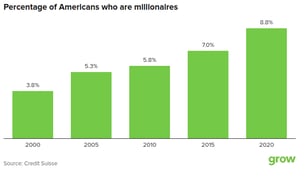 If a million dollars isn't what it used to be, why are there so few millionaires?

Why am I writing this?

Because today I read another article about 'How to scale your company'. It's written for founders and executives on how to get more sales. If you've invented something awesome and some shark will give you a gazillion dollars, go for it.

You hear "Solve for the customer". Well, who's gonna solve for you? What about what you want? Your company provides leads, but what they call a lead and what you call a lead are often two different things. How about getting leads that actually want to talk to you? How many of the leads that you get have already been contacted by multiple other reps all saying the same lines that they learned in the same company training class, or in a class run by some expert that the company hired to meet the company goals, without regard to 'solving for you'? I wish every sales candidate applying for a job would ask, "How many salespeople have you hired and how many are still working for you?" Don't be surprised when you hear that 80% are gone. Brighter pastures. Mismatch. Whatever. Focus on you.

Think about this. If you were a founder, owner or executive, would you want a process that 90% of your salespeople could do or one that only 10% could do? Of course, you'd pick the majority. Now, think about this. Only 8.8% of Americans are millionaires. Is it possible that they do things differently than the majority?

So, what do they do differently? They forget about their Eff'in Sales Quotas, They realize that their quota is meaningless. Here are a few stories about reps who have become rich by ignoring their quotas.

If you have questions, comments or need clarification, just ask.