Like most of my articles, this is real life from yesterday.

David Weinhaus cares about his customers and partners, likes me and is passionate about and good at what he does. That means that he's not shy about 'suggesting' that people that he cares about contact me to work with me. So, here's what happened when David read Could You Be the Next Sales Rock Star?.

21st Century referrals aren't always, "Hey, you should talk to Rick. He helped me and he could probably help you." Sometimes, someone thinks that your content or offer might help someone that they care about or their followers in general. So, they share it on Twitter, LinkedIn or by email. This is how David got Josh on my radar. 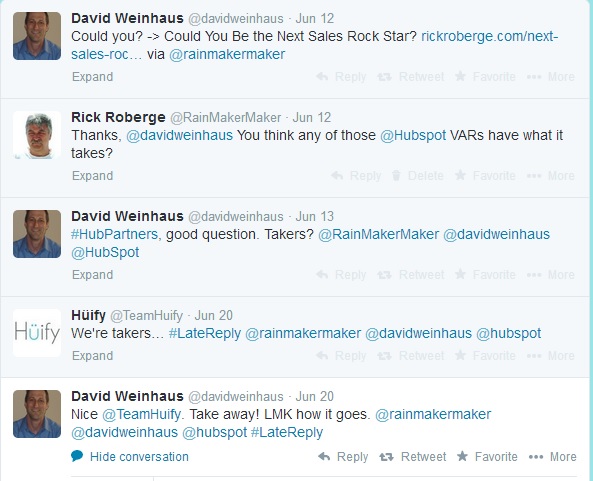 Thank you, David. He not only introduces me to his followers, but he wants to be kept in the loop.

So, some salespeople get a referral, the positive response from the referral and the positive reinforcement by David and start counting their money. Their "happy ears" hear stuff and believe it without confirming meaning or intent. They assume and are totally surprised and dejected when things don't go as imagined. Here's what I did.

So, here's my questions.

Finally, salespeople are in a hurry. They have quotas. They have a full schedule. They have needs, goals and dreams. Their happy ears here something close to what they want to hear and miss the details. Did Josh miss details or misunderstand or is he back-pedalling now? (As an aside, don't you think that Josh bears a striking resemblance to this guy?) Prospects know that salespeople don't pay attention to details. Typical salespeople pay close enough attention to get the piece of information that they need to move the sales process forward. Prospects don't want to be processed or rushed. They want an expert, that totally understands their world, issues, goals, challenges, dreams and is willing and able to help in the way that the prospect needs to be helped.

May I close with three questions?