Three different stories with the same ending. Here's what happened.

First, you need to know that my calendar was especially busy because I posted this on LinkedIn.

One rep booked a call with this agenda. "I'm a newer salesperson at a career crossroads and am needing to invest in myself and my skills in the right ways before taking the next step."

We spoke midday Monday. Last year they sold $1 million. This year, they'll be lucky to hit $600K, but "everyone on the team is having a bad year."

I sent her articles that were relevant to our conversation, and I asked, have you read this article? (which we hadn't discussed.)

Do you think that I could help you save 2017?
When I asked, "Do we need to speak again? Are we done?", they thought that I was trying to close by going negative, when in fact, I was asking a real question. Their response was, "I recognize and like the expediency of your approach getting people to no/yes."
We will never speak again.
Another guy booked a call to talk about, "Sales training, growing sales, mental models".He had actually filled out my Contact Me page a week earlier saying that he was "Interested in sales coaching program." He was pretty delayed in responding. but we did wind up talking, when we spoke, he was guarded even though he knew one of my recent rock stars well. My guess is that he's in a job where he's underperforming and not getting the kind of support that he needs. He eventually replied, "I haven't had a chance yet to spend some time with the links. For now, I'd say we are done. I'll continue to follow the blogs and perhaps we'll have another opportunity in the future."
We will never speak again because the devil he knows is better than the angel he doesn't. 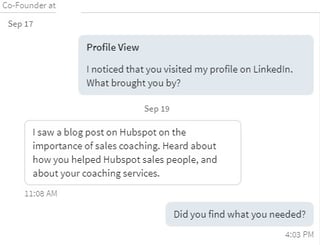 Finally, a founder looked at my LinkedIn profile on September 17th and, as you can see, I did what I do. His company has never sold anything. He's hoping for an investor to see how awesome his stuff isand give him a gazillion dollars. He'd like a magical sales process. He'd like more cooperative customers, but he doesn't want to change, because he's the smartest guy in the room.
On 11/20, I called him, and sent this email.
Why did I call tonight?
Because I am doing you no good with our current relationship.
Because it's not about sales. It's about knowing how to get people to do the right thing.
Because, with me, you need to be all the way in or all the way out.
We will never speak again.
I was disappointed, but realize that although almost everybody wants more, most aren't willing to change.  of
Let me end on a more positive note. While these guys were dancing, another founder started and in our first week working togetherwrote these 100 words.
Every one of the three above is stuck in their comfort zone and afraid to step out of it.
Remember this one stepping out of their comfort zone?
So, let me ask two questions.
If I could get you to sell/earn as much in the first quarter on 2018 as you did in all 12 months of 2017, would you give me 10%?
Are you ready to stick your toe in the water that's outside your comfort zone?