Have you been watching LinkedIn? You're gonna love this! 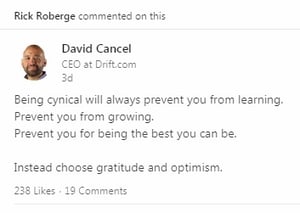 It started about a week ago when David Cancel posted. I commented, but (as you might expect) I wasn't aligned with most. A friend of mine sent a private email and shared the origin of cynics which ends the 3rd paragraph with "negative aspects of Cynic philosophy led to the modern understanding of cynicism to mean a disposition of disbelief in the sincerity or goodness of human motives and actions". So, can you be a cynical optimist (or an optimistic cynic)?

Is it easier for David to be optimistic because he's a gazillionaire and whatever happens in his business today, he'll still eat tonight? Is it tougher for people who are trying to pay the rent? Look at any company. Are there a some who have 'made it'? Are there some who failed? What are the percentages? Do optimism or cynicism really matter?

Have you noticed that people tend to be more optimistic about their own ideas and more cynical about others ideas? My friend also shared this article about Hypocrisy and Self-Ignorance. Is optimism just another way of polarizing? Do we have to lie to get through life?

I talked to a guy last week that doesn't care what his prospects are trying to accomplish. He just wants his prospects to schedule enough time to give his tool a legitimate try. Here's the funny part. If he reads this, he won't know that I'm talking about him. We are terrible self judges.

Let me wrap up with three bullets.